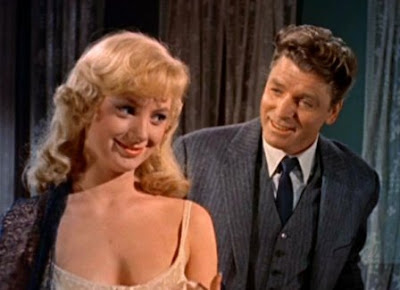 When I saw Shirley Jones last week at the Castro, it was part of a TCM series about classic movies. That night, they showed "Elmer Gantry". I had seen the film before, but never on the big screen and the added dimension of the film really helped the film pack a wallop.

Everyone did an excellent job in the film from Burt Lancaster to Jean Simmons to Shirley herself. Even Edward Andrews who typically does a one-note character of a blustery, flustery guy in the best Fred Clark or Joe Flynn fashion, actually turns out a much meatier, slimier performance than is typical for him.

The basic story is about a con man named Elmer Gantry (Lancaster) using his wiles as a mock preacher in order to attain the affections of any number of women. Simmons is the latest in the long line of his conquests who happens to lead a traveling sermon group. Meanwhile, a prostitute (Jones) knows the true Gantry and is determined to expose him as a fraud. You have to watch the rest to see how it turns out.

I highly recommend seeing this film even if you can't see it on the big screen, it is still well worth watching.
Posted by Fun Ideas at 8:05 PM